Fire ants normally spread by one of the following methods: seasonal relocations, migration in nursery stock, natural mating flights and during floods. They have developed a unique method to keep from drowning that also helps them spread their colonies. At first hint of rising water, worker ants gather the entire colony into a ball (sometimes as big as a basketball). As the water overtakes the mound, the ball rides the flood like a living raft, rolling in the water so all the members can take turns breathing. When they strike a solid object, be it a swimming dog or your canoe, they quickly swarm aboard.

Mating flights are the most natural way that fire ant colonies spread. Mating between the winged male and female ants (also called alates) takes place 300' to 800' in the air, usually in late spring or early summer. The males fly up first and wait for the females. After mating, the males die and the newly mated queens seek moist areas to start a new colony, normally within one mile of the mother colony. But these new queens can be blown by the wind up to 12 miles during mating flights! Once the female lands on a suitable moist site, she removes her wings, digs a small burrow in the soil and then seals it. Within 24 hours the queen begins laying eggs, normally only 10 - 15 in the first cluster. The queen ant can live up to 7 years and will produce up to 1,500 to 1,600 eggs per day throughout her life.

Fire ant workers are sterile females that range in size from .08 to .2 in length. The larger workers are called majors, the medium sized are called medias and the smallest size are called minors. A fire ant mound can contain 80,000 to over 250,000 workers. Disturbed or injured workers release alarm pheromones to the other ants. All of the workers can sting and inject venom that causes blisters and allergic responses, including possible anaphylactic shock.

About 5 million Americans are stung every year! In infested areas, fire ant stings occur more frequently than bee, wasp, hornet, and yellow jacket stings. Stepping on a fire ant mound is almost unavoidable, especially when walking in heavily infested areas. Furthermore, many mounds are not easily seen, with many lateral tunnels extending several feet away from the mound just beneath the soil surface. Ants defend these tunnels as part of their mound. More than 25,000 people each year seek medical attention for painful fire ant bites. The sting itself is usually not life-threatening but secondary infections can result. To prevent infection, do not scratch pustules and treat the sting with an insect bite remedy. Persons who are hypersensitive to the fire ant venom may experience symptoms such as nausea, dizziness or even shock or death. Individuals exhibiting such reactions to fire ant stings should see a physician immediately. About a dozen Americans die of their wounds each year.

A person who stops to stand on a mound, one of its tunnels, or who leans against a fence post included in the defended area, can have hundreds of ants rush out to attack. Typically, the ants can be swarming on a person for 10 or more seconds before they grab the skin with their mandibles, double over their abdomens, and inject their stingers. Multiple stings are why some people die!

Major fire ant problems do not occur in their native land where the fire ants fear phorid fly species that only live to torture and kill fire ants. Phorid flies are being currently evaluated in Gainesville, Florida. Although a single fire ant sting hurts less than a bee or wasp sting, the effect of multiple stings is impressive. Multiple stings are common, not only because hundreds of ants may have attacked, but because individual ants can administer several stings. Each sting usually results in the formation of a pustule within 6 to 24 hours. The majority of stings are uncomplicated, but secondary infections may occur if the pustule is broken, and scars may last for several months. Severe infections requiring skin grafting or amputation have been known to occur from fire ant stings. Some people experience a generalized allergic reaction to a fire ant sting. The reaction can include hives, swelling, nausea, vomiting and shock. People exhibiting these symptoms after being stung by fire ants should get medical attention immediately. Death can occur in hypersensitive, older, and very young people. Individuals who are allergic to fire ant toxins may require desensitization therapy.

If you are stung by a fire ant:

Fire ants are omnivores and will eat plant and animal material including mice, turtles, snakes, other vertebrates, crops, plants, saplings, wildflowers, fruit and grass but they prefer other insects. They can destroy or damage crops such as soybeans, blueberries, peanuts, sunflowers, watermelons, cantaloupes, cucumbers, pecans, eggplant, corn, okra, strawberries, and potatoes by feeding directly on the plants and/or by protecting other insects that damage the crops. The fire ants may feed on plant seedlings and germinating seeds causing crop damages. They chew the bark and growing tips of citrus trees and feed on the fruit.

The oldest and most expendable 20% or so of the colonys fire ant workers leave the nest to search for food. They explore 50-100 feet from the nest with an efficient looping pattern. Although the worker ants can chew and cut with their mandibles, they can only swallow liquids. When they encounter liquid food in the field, they swallow it and carry it back to the nest. Solid food is cut to reasonable size and carried back to the nest. They prefer protein foods (insects and meats) but will feed virtually on everything including fruit, seeds, grease, butter, honeydew, plants, nuts, etc. Like other ants, fire ant workers share their food with their nest mates by regurgitating it so that it can be licked or sucked up as a liquid by other ants. In this way, most ants in the nest get fed equally. This food sharing is also why slow-acting poison baits can be an effective control tactic against fire ants. You can try using 1% or less borax or boric acid with 10% sucrose in water by ant colonies for 3 - 4 months (it may take that long to get control).

Because of their fiery stings and occasional news stories of livestock or people killed by multiple fire ant stings, people fear fire ants. In some areas infested with certain species of fire ants, lawns, school yards, river banks, athletic fields, mulched areas, compost piles, playgrounds, parks and picnic areas lie abandoned and unused because of the medical threat caused by the presence of fire ants. In campsites of state and national parks infested with fire ants, it is often difficult to put up or take down a tent without being stung by angry fire ants. They will storm anything that threatens their mound or that looks like food.

Fire ant mounds can interfere with farming and mowing operations by breaking equipment as well as turning ornamental turf and recreational fields into aesthetically disfigured moonscapes. Fire ants have caused sections of roads to collapse by removing huge amounts of soil from under the asphalt. They can nest in air conditioners, traffic lights and other electrical connections, often causing disruption of service. Increasingly, fire ants have also been found nesting in water meter casings, computers, television sets, wall voids, around plumbing and under carpeting in structures. Their presence inside can threaten pets, children and sleeping or bedridden people. You can usually quickly control them with diluted Kleen Green™ (read below the drench removal method and tips).

The ants have also been found invading and chewing on insulation on wiring and moving soil into these areas causing power failures in outdoor electrical equipment, apparently attracted (like many ants) to the electrical fields or impulses. Infested sites include household electric meters, air conditioning units, traffic signal control boxes, and even airport runway lights. Use clinically proven Perma-Guard Crawling Insect Control™ on wiring, insulation or any electrical equipment. 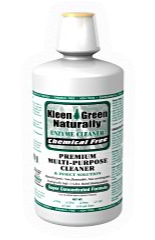 Why and How Kleen Green™ Works

Insects are made up of a high concentration of protein. When Kleen Green is introduced to the insect, the enzymes act and can cause the insect to molt (shed its outer coating) prematurely. Poison pesticides attack the nervous system of the insect, which is not always effective. University research has noted that some insects have developed a resistance to poison based products. This revolutionary product is now available to the general consumer. Preformed enzymes have been used widely in restaurant and institutional settings for the last ten years, due to their low toxicity and superior cleaning properties. They are also becoming widely accepted in the field of pest cleaning as enzymes leave no toxic residues and the enzymatic effect on the insect exoskeleton is quick and safe. SAFE for Gardens, Plants, Ponds and around children and pets!

A Natural Alternative to Toxic Products

THE MOST SUPERIOR NON-TOXIC REMEDY ON THE MARKET TODAY

How to use Kleen Green™ Enzymes

All Natural Ginesis products are safe and non-toxic when used as directed. Natural Ginesis is not a substitute for medical advice. The operators of this website and those who provide information for this site do not directly or indirectly practice medicine or dispense medical advice or services through this website. You should not rely on this information to determine a diagnosis or course of treatment, nor should it be considered a replacement for consultation with a physician or other certified healthcare provider. Natural Ginesis and its distributors do not make representations or warranties with respect to any information offered or provided on or through any company web sites regarding treatment, action or application of product. Neither Natural Ginesis nor any of its divisions or contributors shall have any liability for the content, errors or omissions in the information provided by this web site. Neither Natural Ginesis nor its distributors are responsible or liable for any advice, course of treatment, diagnosis, or any other information, services or products that you obtain through this site. Those with health problems, pregnancy or who are nursing are specifically advised that they should consult their physician before taking any nutritional supplement.